The Incentivised Switching Scheme (“ISS”) closed on 30 June 2021. In the life of ISS, 69,135 SMEs switched their account from Natwest to one of the participant organisations. Full details of Dowries paid, number of customers switched and in which turnover bands can be found here. The residual funds of £24.1m were distributed (in line with the ISS original design) to the three ISS Participants which attracted the most switching SMEs. Agreements with the three awardees expired at the end of December 2021 prior to which a further 436 SMEs transferred from Natwest to them, bringing the final total of SME switches under ISS to 69, 571. More details can be found here.

The purpose of the Incentivised Switching Scheme was to provide funding of up to a maximum total of £275 million to Eligible Bodies to use as incentives to encourage SME banking customers (with an annual turnover of £25 million or less) of the business previously described as Williams & Glyn (the “Relevant Customers”) to switch their business current accounts and loans to the Eligible Bodies; £225 million of the fund was available in “dowries” with respect to any Relevant Customers that agreed to transfer their business current account and £50 million was available for loan related dowries for those Relevant Customers who moved a loan product in addition to their business current account. Up to an additional £75 million was made available by NatWest Group Plc to cover customers’ costs of switching (e.g. through waiving or reimbursing break fees and/or other third party costs incurred by customers, such as legal fees). The initial duration of the Incentivised Switching Scheme was 18 months (ending 25 August 2020) or such earlier time as £225 million has been distributed to eligible bodies as dowries in relation to business current accounts.

Following agreement with RBS and HMT on 22 June 2020, the Incentivised Switching Scheme was extended to 30 June 2021. Any customer wishing to receive a dowry had to have applied to their new bank by 28 February 2021 and the switch fully completed by 30 June 2021. As stated above, the residual funds of £24.1m were distributed (in line with the ISS original design) to the three ISS Participants which attracted the most switching SMEs in agreements which expired at the end of December 2021.

Further details on Dowry Amounts are set out in the Dowry Calculation Schedule here.

Participants in the Incentivised Switching Scheme:

*Following a strategic decision to delay developing its Business Current Account, Nationwide withdrew from its intended active participation in March 2020.

** Santander UK plc declined to participate in the extension and ceased to be a participant from 26 August 2020.

The amount of dowry that an Eligible Body was entitled to receive in respect of each Relevant Customer that switched was determined based on the Relevant Customer’s turnover and, if applicable, the outstanding balance on the loan product being transferred. Dowries were distributed quarterly in arrears. Eligible Bodies were required to use the dowries for the benefit of transferring Relevant Customers.

The applicable dowries in respect of business current account transfers are set out in the table below:

The applicable dowries in respect of relevant loan product transfers were calculated as follows: outstanding loan balance transferred x 0.035. [The original factor was 0.025 and amended 25/03/20, backdated to the start of the Scheme.] 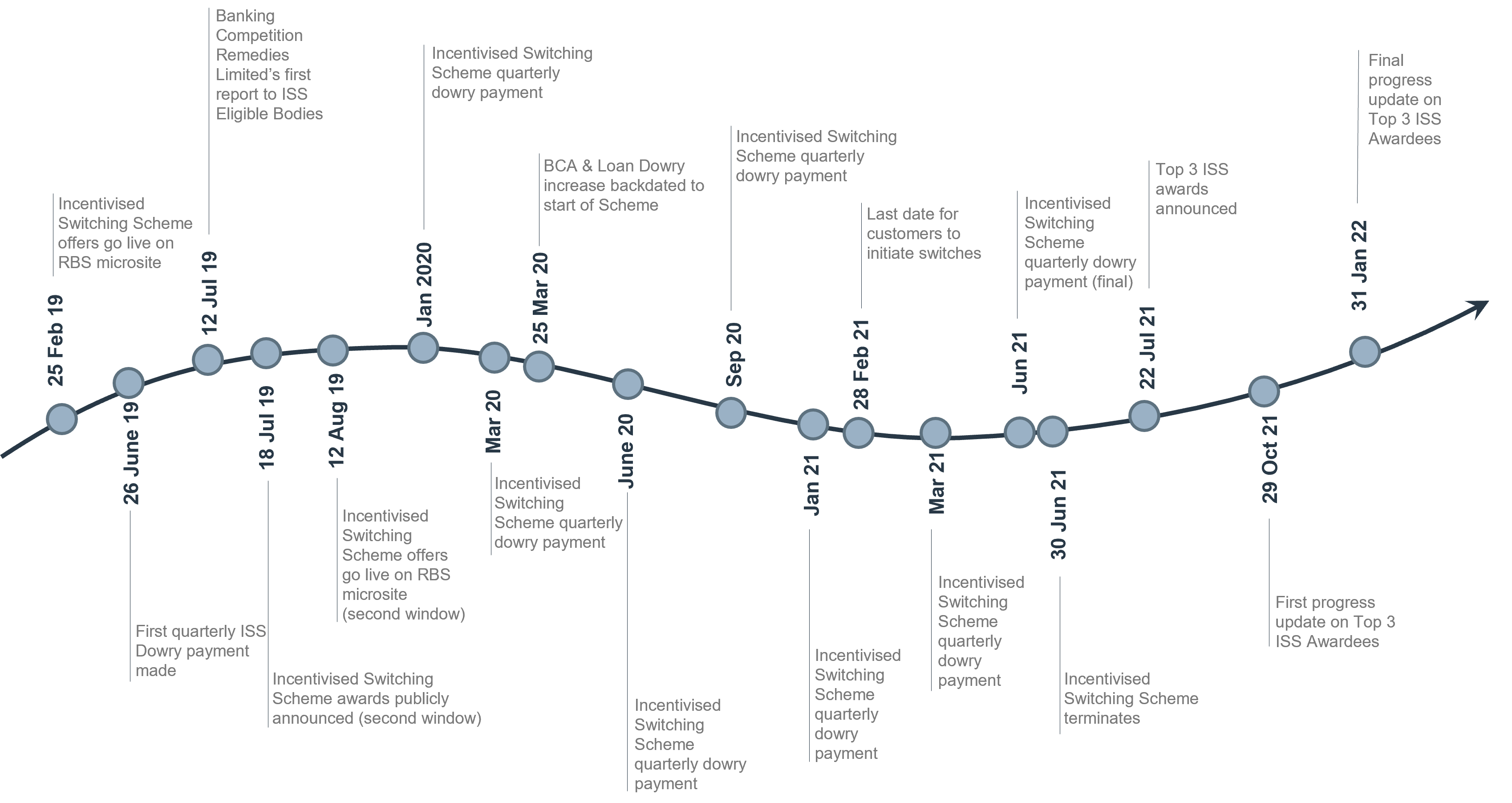